Sunday early afternoon brought the last two lambs.    They are Carrie and Campbell.    Carrie is a black gulmoget and Campbell is a moorit gulmoget.    I wish it was the other way around, but can't complain since at least one of them is a ewe lamb. 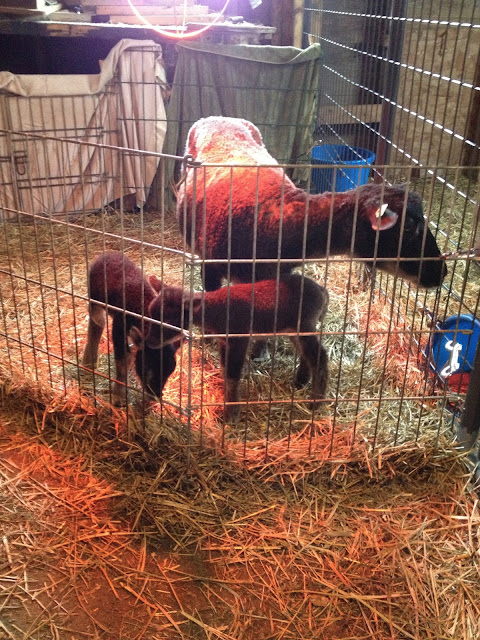 Here they are getting acquainted with the guy in the next cell.  It is probably Whalan since he is the most outgoing of the "W" twins. 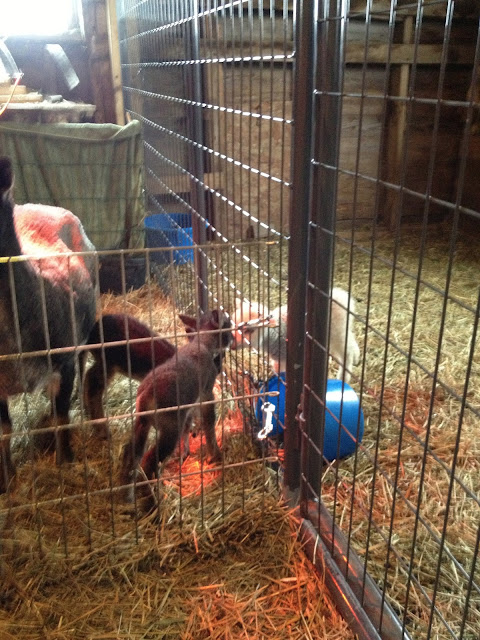 Minnie had a single ewe lamb at 7:30 yesterday morning.


This is a closer picture of my lone ewe lamb.   She is adorable.


Juni B had a single black ram lamb. Johnny, about two hours later.


Whalen and Willie really like basking in the rare sunlight in the front of the garage/lambing barn door.  I put the blanket down, and they promptly settled down for a nap.  I have one ewe yet to lamb.  She is Minnie's mom.  Maybe their line will give me all girls this year.

My herd is very small, so lambing is a real big deal here.   I was so shocked to have three ewes lamb yesterday morning.  The weather was not cooperative, but we managed.  They did most of the work to get them dried and fed and warmed.  Today they are jumping all over their jugs and keeping me from doing anything because I keep running out there to snuggle them.

Their names will reflect their mother's first initial and the names, first or last, of country singers.   Little girl and one boy are not yet named.    Some suggestions have been made, but they have been rejected by the shepherdess.   (All suggestions would be appreciated.  I don't do country music.)
Posted by Sharrie at 4:12 PM 2 comments: