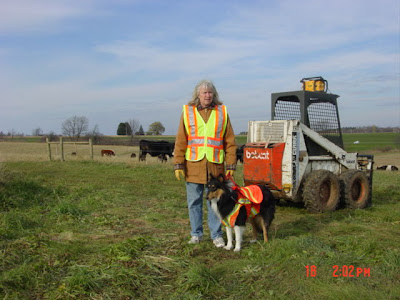 Well, not really. We don't hunt, but we dress up when we go walking this week. In Wisconsin it is the only safe thing to do. With a little help from Jake's old highway department vest and a "dog safety outfit" from Farm & Fleet and a little sewing ingenuity, Scooter has a hunting suit. Luckily he doesn't object.

In the picture, you can see the cows out in their newest pasture. It is really just a smallish area where Jake plans to put out the hay that he feeds them in the winter. It is off to one side at the back of the barn where the hay is stored and should be an easy trip for the bobcat. A new gate and a new place to feed the cows should make feeding much easier this winter.
Posted by Sharrie at 2:13 PM 2 comments: 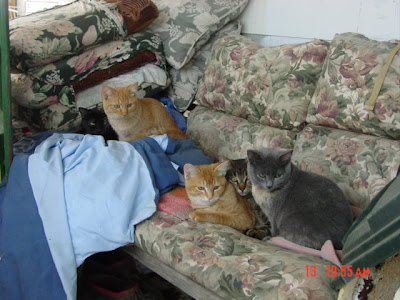 Here are the five little faces that were four kittens and their mom last summer. They are all fixed and grown up......mom, three daughters, and their brother. He is the striped gray one in the middle. They mostly live on the outside porch on our house. It was pretty late to put them outside, but they will be able to keep warm when the weather gets real nasty because I will let them into the guest house. They will just have to share it with anyone else who wants to get warm at some particular time.

They aren't the most tame and affectionate of all the cats, but Toonces, the boy, and the grey girl are getting pretty good.

Weather here is raw. Scooter and I will have to go out for a walk, but I am putting it off hoping that it will be a little warmer this afternoon. It takes much longer to get ready to go out for a walk since we have to wear out hunting outfits. Scooter has an old highway department vest that I altered. After the alteration, I added a dog vest on top. He looks pretty cool and doesn't object to the whole thing. I just wear a highway vest that is a bit newer than his was. We can be seen, and it is necessary. Up here the whole world stops when deer season starts. Stores are closed that are usually open on Saturday and stuff like that. We are really out of it, so I feel more included when I wear my blaze orange.
Posted by Sharrie at 9:11 AM 2 comments: 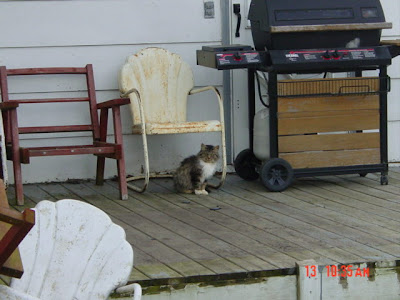 Who is this kitty sitting on my "deck"? He/she has been around here all summer. I think she must be nearly feral since we have never gotten near her. However, she is getting closer to us as time goes on. This morning I happened to look out my big kitchen window to see her sitting under that chair. I jumped at the opportunity to get a picture of her. (Hopefully, she is not a she. The last she turned into five this summer.) But.......this kitty sure looks like the one in my previous post. That cat acted wild until caught. Could this kitty be the same? Will we ever know? My life is just one big question.
Posted by Sharrie at 10:30 AM No comments: 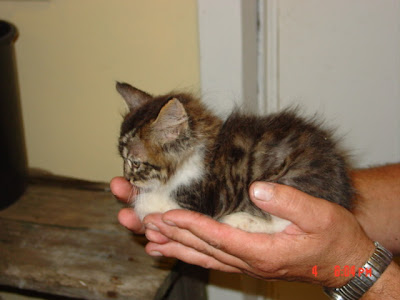 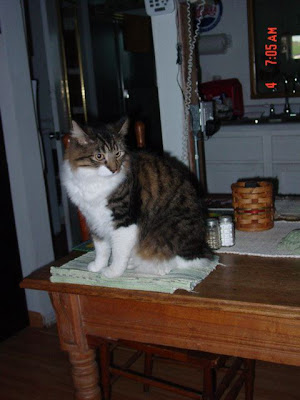 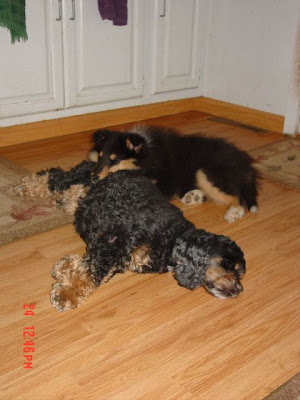 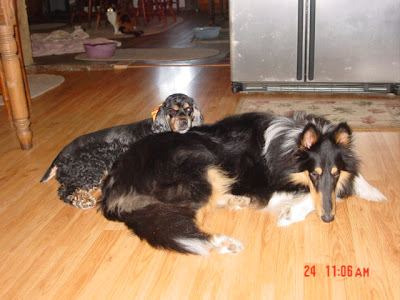 Now, who would give up a kitten as cute at the one sitting in Jake's hand in the picture? It sure was a mystery to us. He was caught in our barn after several attempts, couldn't get a trap small enough. When we took him out of the trap, we expected WILD.......what we got was totally socialized kitten. I just couldn't leave him outside, and he became cat number four in our house. He kept his claws and is often threatened with being tossed out of the house to fend for himself. He is a bit of a terror, but last night he paid for some of his keep by catching a mouse. It is only the second mouse we have seen in this house which is quite a surprise considering the condition of the house.

As can be seen by the picture, Junior Minty Fresh, grew up to be a very big boy. He is overweight, but it is hard to control his weight with three other cats in the house. He plays with Scooter which is good. When Scooter came to our house, Junior was afraid of him, and I was disappointed. I thought they would be good playmates since both of them were young. It just took a while for Junior to understand what this other creature was all about. Now they chase and play fight whenever the mood strikes them.

The other two pictures show how Scooter has grown from March to now. Within a few days he had adopted Suni and become her greatest friend. He sleeps touching her all the time. Suni does not have a problem with it except when he happens to lay on top of her. Right now they are right behind me back to back, head to butt. I don't know what he will do when she is no longer with us. That could happen any time since she is 13 years old with several medical problems. I am sure that he will show obvious signs of missing her. Right now, they are good buddies until he wants her to play. She does't play. It is either age or temperment, but she doesn't play. He needs to run off his energy. Walking with me doesn't quite do it, but it helps. He is a great companion with only one bad habit. He keeps eating the books that I am reading. Today was number three. Luckily, he only chewed the binding. The first one, he ate the last pages, the second it was the first pages, and now the binding. There are books all over the living room, but he only eats my novels. Go figure. I have been trying to be careful, but I messed up today. Oh, well, I will have to try harder
Posted by Sharrie at 7:25 PM 3 comments: