Happy New Year to everyone!

Life is quiet, just like I like it,  up on the ridge.    It is "big time" winter.     The Christmas storm left a thick layer of ice which has been covered up with a few inches of snow since then.    The day after Christmas we went down to Kenosha.    What a mistake!    It snowed half the way there and all the way back.  But it was great to see Jake's family.    I guess the science of meteorology still needs some improvement.    Libby and Zippy went along with us, and Scooter stayed  home.    He just wouldn't come to us to go and get into the car.    He really doesn't like riding in the car.   The other two were just fine.    Tonight and tomorrow are just quiet days ------ only special because Jake is home.

Blogger won't let me add any pictures or change the side color, so I guess that's it for now.
Posted by Sharrie at 9:30 PM 2 comments:

We are having a blizzard.     It is expected to last through Saturday.   One time today the wind speed was at 40.0  m.p.h. when I looked at it.    The cows are in their lean with fresh straw and three round bales of hay.     The sheep got fed in their sheds tonight.All the outside cats are in various protected places either in the heated milk house or on one of two porches.   Todd is enduring the second blizzard already this season.......not happily, though.   Jake will probably have to work on Christmas.   Even the dogs don't go out to play tonight.......it is tooooooo windy and snowy.

(Garrett thinks this if fun?)     At least we don't HAVE to go anywhere tomorrow although Todd has to go to LaX for a doctor's appointment.

We are all warm and safe.    Merry Christmas to everyone and stay safe if you are involved with this storm. 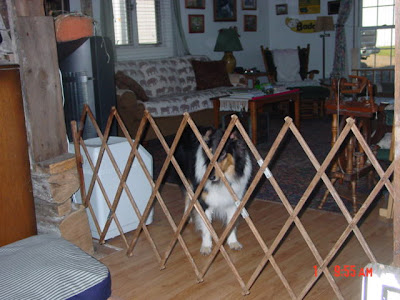 We have found that our culture forces us to live in a gated community.   We just couldn't exist if we were forced to live in a home where all the "riff raff" mingled in one messy group.    The  pictures should explain our predicament.    Here Libby is locked in the living room.   This is unusual for her since she is usually locked out because of her barking at the big window 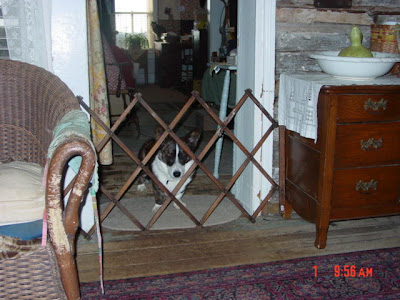 Then we have the bedroom.   Sometimes no dogs are allowed to be in the bedroom either.   Usually Zippy is on the other side of this gate in the dining room.     The restrictions from these two rooms is usually because of wet feet. 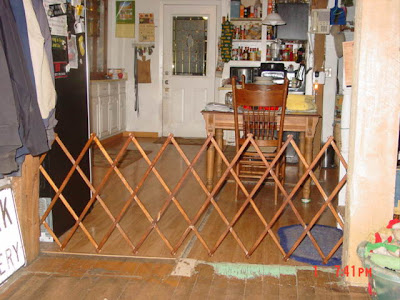 Then there is the gate into the kitchen where the dogs get locked now and then.   They also get separated twice a day when they get fed because Scooter is a FINICKY eater, and everyone finishes before he does. 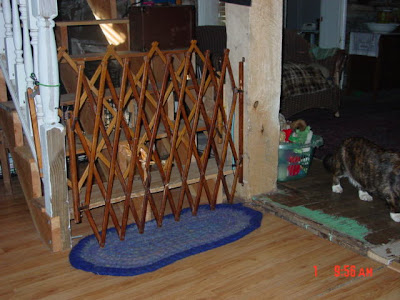 In the kitchen is the stairway.   It has two gates mostly to keep Zippy from climbing the stairs since the collies don't do stairs which is OK with me.    The cat "stuff" is  upstairs as is my quilting machine, so I really don't need dogs  up there.  The gate in the front swings over to separate the dining room and the kitchen. 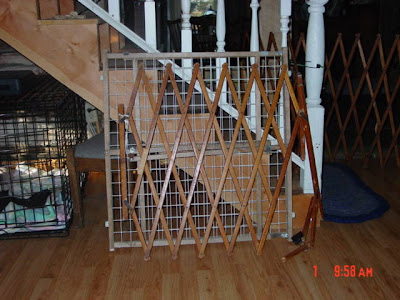 Lastly, there are the two extra gates which help with any other riff raff that may show up.   One needs fixing, and I think that will be tomorrow's project. 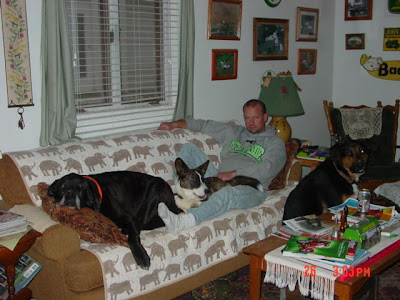 Here is some of the Thanksgiving riff raff that showed up with my son Dave.    Zippy really had a ball with the dog on the right, Rover.    We really had the long and the short of it because one of Rover's parents is a Bernese Mountain dog.    They were fun to watch and provided comic relief all weekend.