Boys and their toys 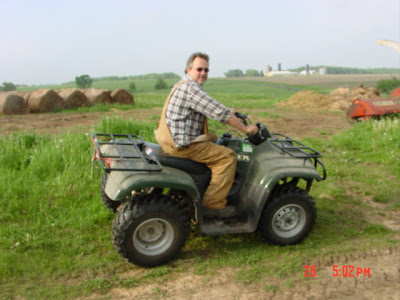 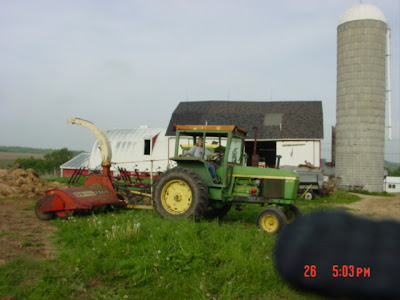 Or maybe it would be a good idea for the good Hungarian doctor to learn about 4-wheelers. It is a great farm implement. We use it for everything you can imagine. Of course, sometimes Dave comes up and uses it for recreation. It is great fun

OR........maybe he would like to try out a bigger tractor than the one I mentioned yesterday. I drive the one in the picture when we use the chopper to fill the feeder wagon for the cattle. There is also the 4010, 5010 and the 3010. Jake has a thing about John Deere tractors. We are tractor poor.

I suppose he could try them all out and decide for himself which one suits him best. But then again there is always the bulldozer........

We really do have a lot more equipment than we did down in Salem. The best one is the combine. It is really cool, and I enjoy just riding along in that big machine.
Posted by Sharrie at 8:04 PM No comments: 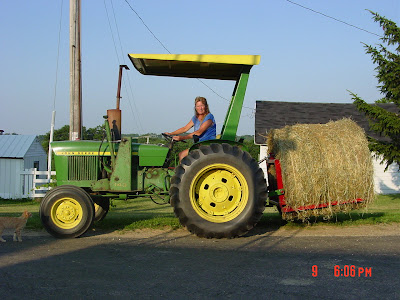 Yes, we have having a highlight that is actually planned. We are having a visitor, and not just any visitor. He is Dr. Peter Batar from Hungary. He is attending a medical conference in Chicago and is coming up here for a short, toooooo short, visit before he returns to Europe. It will certainly be a highlight for us. We haven't seen him since he did research in Oklahoma City years ago. It will be wonderful for us.

Now, what will he do while he is here. I certainly hope that he plans to take over my job as hired hand. I am quite willing to let him use my tractor as seen in the picture to do whatever the farm boss, Jake, wants done on that day. I will be glad to sit in the house or on the deck with my feet up. OR........he could use the new Dixon lawn mower. There is more than enough lawn to be mowed. OR........he could just sit around and enjoy "God's Country" with me and the critters. OR........he could do all of the above. It is his choice because I will just enjoy seeing him again.
Posted by Sharrie at 2:56 PM No comments:

Three on a match 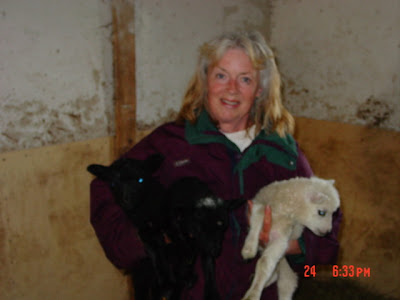 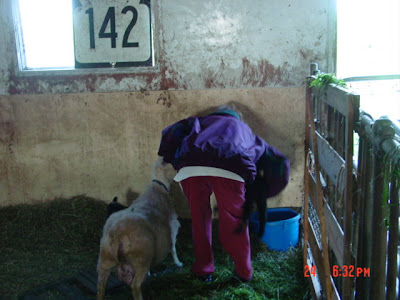 I have been lax in posting to this blog. It is because the appraiser
came here today to have a look for our refinancing. I have been more
than busy getting all my "stuff" moved from the upstairs here to the
upstairs at the guest house. (sounds like a fancy place) Yesterday I
spent the whole day carrying boxes upstairs and getting them put in the
right places.

The real story is the three lambs that Mellow presented on Saturday afternoon last week. The sad part is that they are all ram lambs. Two of them have real crimpy fleece with the best one being the white one. Now, what do I do with three ram lambs? That is really something to think about. They can't be father to any of my ewes but Millie. Their father is my ram lamb from last year, Linus. He did quite a job on everything but the gender.

It is good to have something to think about.

The other picture is an example of the humor of my dear husband. He missed this shot with Ami's twins. Last year he got a great shot from behind of me picking up the twins for my picture with them. This year he got me again with the triplets. Maybe he is taking them to compare the size.......me or the lambs?????? This year I come out on the up-side compared to last year.

Now, if anyone who reads this has an idea of what to do with four ram lambs, just let me know. The freezer is really not an option at this time.
Posted by Sharrie at 8:06 PM No comments: 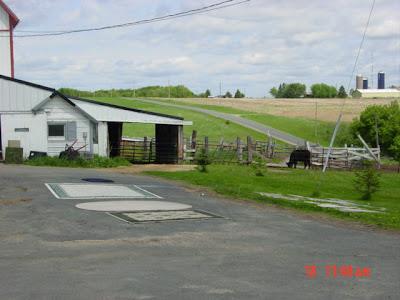 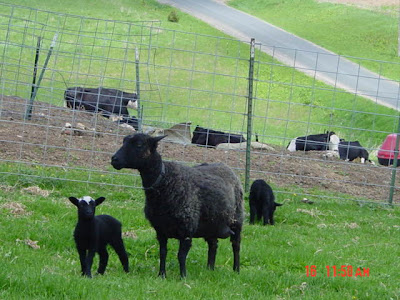 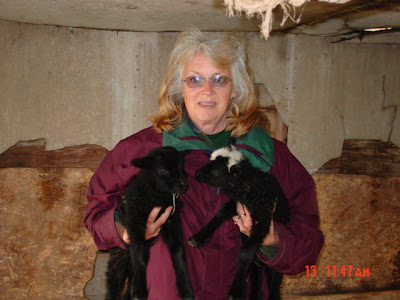 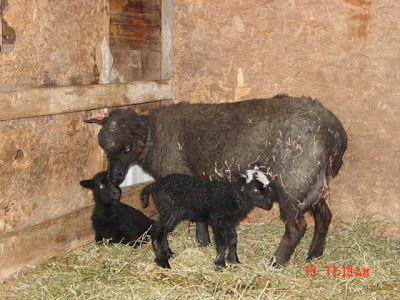 Sorry about the mess on the last entry. I don't know why it does that sometimes. Where I wrote it, it was just fine; then when it was published, it was a mess.
I never know what will be there when I push the "publish" button.
Posted by Sharrie at 3:15 PM 1 comment: 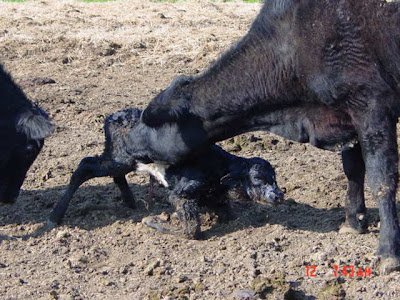 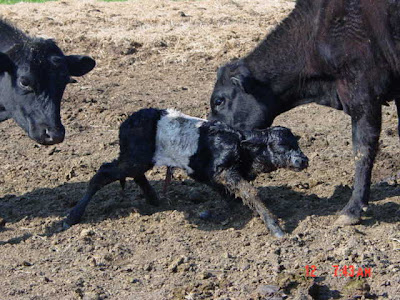 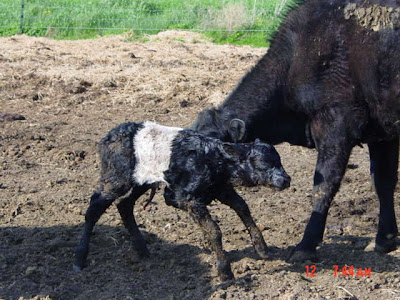 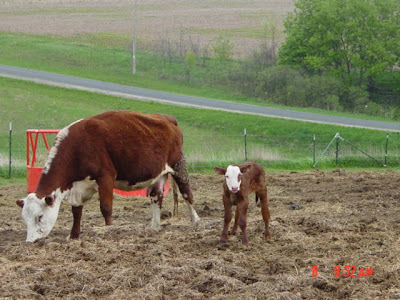 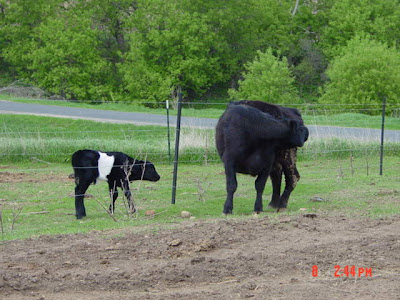 Here we go again. We spent two hours last night from 7-9 waiting and watching for Spike to have her calf. We knew it was going to happen; we saw her water break; we could tell that she was having contractions. But would she have the calf before it got dark, and we went into the house? NO!!!!!!!!! I went back out at 10:30, and the calf was on the ground, wet, but licked off. We missed it again. Last year, Poppy did the same thing to us, only worse. We had her in the barn, and when we went in to grab a quick supper, she had her calf.

Oh, well, I guess I am happy that he is here and doing well. Unfortunately, he is a boy. His name is McGee. He is the brown one in the picture with his Hereford mom.

The other picture is Ducky, the calf that was born on Sunday morning while we were at church.

That brings out total to five, three boys and two girls. We need more girls!!!!
Posted by Sharrie at 3:48 PM No comments: