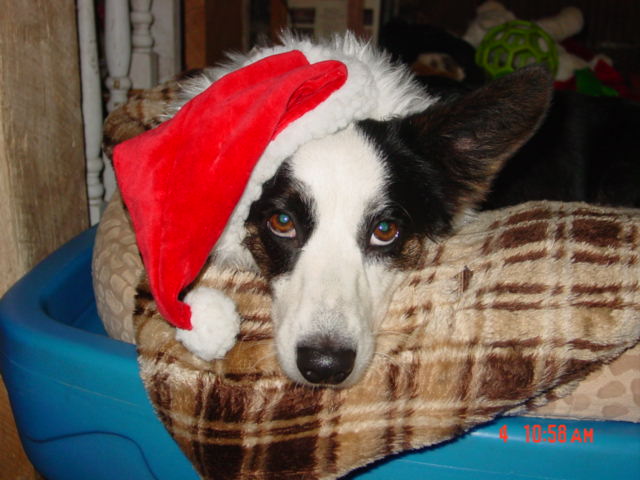 Little Beaver got to be "Santa's Favorite" since he turned two years old a few weeks ago.    He was really the only one that would put up with the Santa hat.    The others don't know- that their time will come.

As of this weekend there is a good chance that we will have lambs next year.    Pia from Nancy and Darla from Becky are each in with their own big guy.     Pia is in with Baileys from Karen, and Darla is in with Fluffer.....son of a ewe, Mellow,  from Tami Mulder.   I do plan to add at least one ewe to each pen,  Cleo from Becky and Wheat from Juliann.     There could be two more, but I do not know if I should breed that many.   The vet came the other day and cut horns on Pops who had teacup horns.   One was infringing on his eyesight, the other had broken off before, but she shortened it also.    After all my worrying, it was a fairly easy procedure.    Thank heavens!   That same week, Linus, whose horns were not massive, but well formed, broke one about half off.    Some blood, but no problems.   The two boys I am breeding are both polled, not perfect, but close.

Our next big day is next Monday.    I think we have most everything done to make the event as easy as possible.    Todd moved back to Florida at the end of November, so our built in dog-sitter isn't here anymore.    We do have plans to make sure the doggies are well cared for by Grandma Helen and Aunt Cindy.    Happily, Aunt Cindy will be able to take care of the cow and calf and breeding pens in the barn.  She is an experienced animal person.
Posted by Sharrie at 7:50 PM 1 comment: