Introducing....... High Ridge Hsing-Hsing Panda Bear (guess I have been reading tooooo many sites with dog pedigree names). aka......Bear (There are pictures at the end)

Here is how he entered our world.........After chores last night I made my nightly check on the cows to see how they were doing. I had checked Bear's mom in the morning, and she was fine. Last night about 5:00 p.m. she was separated from the herd and mooing. After a couple seconds, I realized that was the moo I had heard before when a cow and calf had become separated. Oh, shoot, she must have had the calf, and it had escaped through the fence. The calf was no where in sight, and I figured it had laid down and froze when it wasn't by its mom. I started following its tracks since there was still some snow out there. I kept following until I was quite a way from the fence out in an alfalfa field. There in the distance barely visible, because of the fog we had yesterday, was the shape of a calf on its feet. Well, that was good. I went back to the barn told Jake and got a rope and halter and my stick. THEN I trudged out into the field which was alternately wet snow and standing water. Jake came out on foot and the calf was not cooperative. We got the rope halter on him, and I waited for Jake to come back with the truck. He came back with my golf course maintenance cart. We got Bear in the back of the cart and splashed toward his mom. Luckily she followed us up to the barn and into a pen. (There was a lot more to it than that.)

We were all cold and wet. Bear was wet. Mom wasn't licking him. She was hungry.
They were both in a better place than outside. We left her to take care of him. 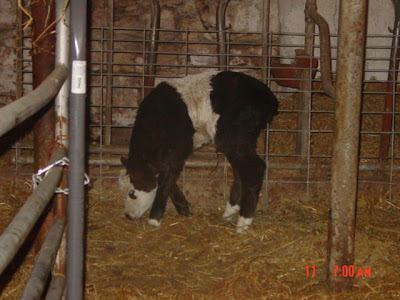 I was too tired and cold last night to take pictures. Bear looks much better this morning. He was dry when I went into the barn, but I couldn't tell if he had eaten. The temperature was about zero degrees. I went into the house and got some milk and a jacket. After I got the jacket on him, I convinced him to try the bottle, and he proved that he knew how to suck on that. Not long after that, I let him go to his mom --like I could stop him. He attached himself to the milk bar and began wagging his tail furiously, so I knew that he had made the proper connection 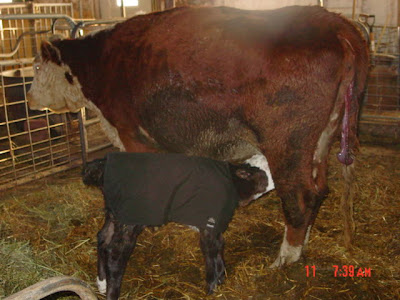 Bear and his mother in the proper position for mother and new born son. He is also properly dressed for the month of March in Wisconsin.

Just another day in Paradise. P.S. The cart does not move this morning. It starts, but I am sure all the water from last night has frozen something. Besides the fact that it is standing in water which is frozen now, of course.
Posted by Sharrie at 9:05 AM

Bear is SO cute! He looks like a BIG, healthy baby! Good thing he's got such a skilled caretaker looking out for him...

I'm still waiting for you to email me your info so I can mail in the transfers on your two ewes. I need your name/address/farm name & flock #.

Have a Happy day and STAY WARM!!

Bummer about the bitter cold, but congrats on Bear's arrival! He's pretty cute, I look forward to more pictures!

His markings remind me of those belted Galloway cows which I think are so neat! Glad everything turned out on a happy note:)

Such a sweet story .....thank you for sharing Bear's entry into the world. He's gorgeous...and has a name fit for a King. I like it! Congratulations.