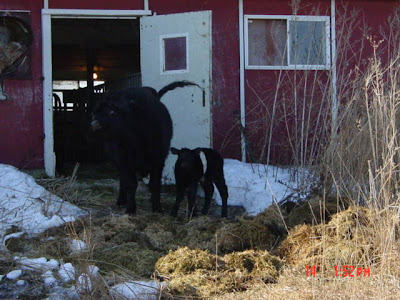 When you aren't looking, all kinds of things can happen. When we went for breakfast, we saw a cow out in the fence line brush. Unusual. When we can back, she was still there and on closer inspection, she had a calf with her. We went out with our Toyota pickup and put the calf in the back with me and hoped the cow would follow. After several tries at that, we gave up even though we had the help of all the others cows.

When we drove out there again, not in the pasture, she was all alone, and she decided to come up to the barn. We had left the calf in a pen in the barn. With a little coaxing we got her into an enclosure, but she won't go into the barn. I am happy with that for now.

Lovey, I was feeling her up as we were bouncing along in the back of the pickup, is a heifer, real lively, and appears healthy. Her mom was not a heifer. If I am right, the new calf will be called Lovey in honor of Valentine's Day.

Still waiting on Holly, Claire.
Posted by Sharrie at 1:49 PM

I think that name is just fine in honor of today....glad you found her health and that it is a girl:)

That's a perfect name! What a beautiful morning surprise.