First, Zippy graduated from puppy kindergarten. It is beyond my ability at this time to assume the pose of the other participants. Zippy had a major weekend---activity wise. He almost made it walking and running around the grass path out in the field twice. It was pretty warm yesterday afternoon, so we had to stop several times. He finally needed to be carried for a while before he could get his energy back. The troup was the two boys taking turns driving the golf/utility cart and Kia and I with the dogs, Scooter and Zippy off leash, and Libby on a long lead. A good time was had by all. 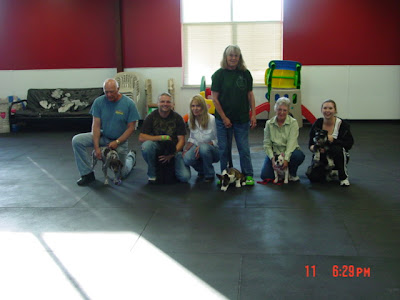 Former neighbors come to visit. The two boys worked at cleaning the rock that broke the plow out in the field. 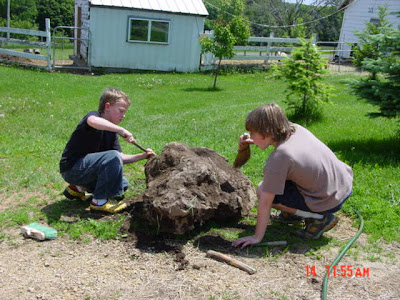 Isaac, the older boy, and I were great friends when he was small, and we lived next door to each other. He is staying here at the farm for the week. Now he is old enough to really work and play with me. We are going to get lots done and for sure ride the Sparta/Elroy bike trail. 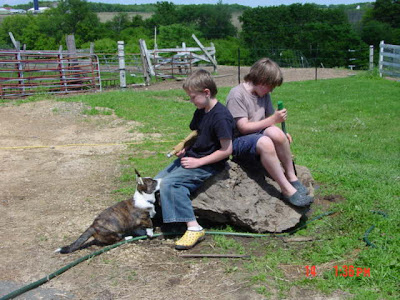 This black dish seems to be a favorite of the white lambs. I had hoped to catch one of them using it as a bed. I think that is my last born lamb, a single out of Justalitl Millie. Happily, SHE, is doing fine. That made my total, 5 rams and 2 ewes. That is even worse than the calf ratio. 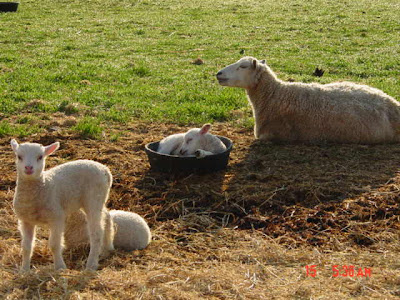 Congrats on the Puppy K graduation!! what's next for the boy wonder??

Sharrie, I'm so glad you ended up with a couple of ewe lambs! Also, may I sign up for the Zippy fan club? I am crazy about that puppy.

You can be the president. I agree; he is a real cool dude except when he is biting my ankles or pant legs.