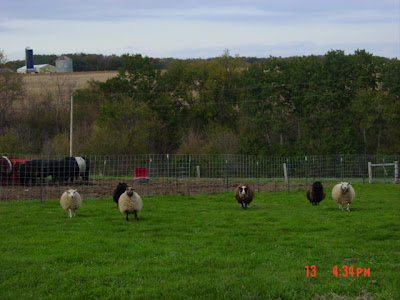 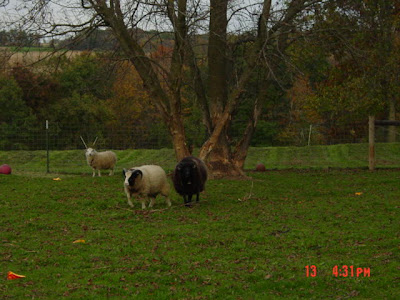 What a day it was. I can't remember having such a wonderful day at home in a long time. I was able to do so many things. 1. I planted two bushes and one tree. They had sat around here just waiting for me to do it. I guess I needed the right motivation. 2. With a little help from some friends, Jake's son and nephew, we got all the sheep outside. It is just easier with some help. 3. I washed a fleece. I just can't get going on that when it is hot and/or cloudy ie. dismal. Yesterday was glorious -- cool temperatures and little wind and some sun every now and then. 4. I finished mowing the lawn. In between times I prepared three meals for three men. That was not the fun part, but it had to be done. All in all it was wonderful. I even managed to take some pictures of the whole gang outside.

When I was out trying to get some pictures, something happened that I had never seen before. I was on the far side of the boy's pasture when what looked like some huge insects came swarming into the pasture. They were about two stories high in sort of a tube shape. I thought insects because they were moving. As I continued to observe this shape, I realized it was leaves and that what I was seeing was a small whirlwind for want of a better word. It was rotating and moving eastward across the area. It continued across the pasture only falling apart when it hit the trees at the east end. That was very interesing, indeed. The sheep also had a look at it when it first entered their domain.

Now, today, the weather is as dismal as it was glorious yesterday. No work will get done on the fence which is very much needed. It will still be a long time before Jake gets all of that done. Today, I may not get anything done, but who knows?
Posted by Sharrie at 10:38 AM