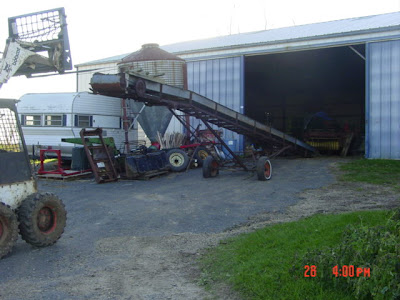 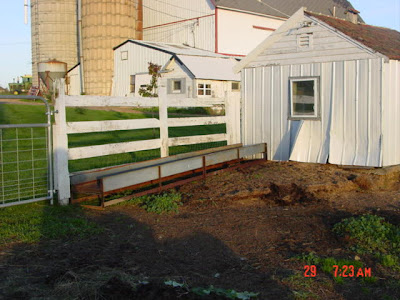 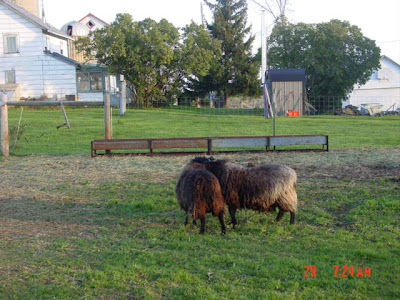 There is a farmer somewhere who thought this old grain elevator was junk. He left it for us.........perhaps as a gift? BUT....leave it to my fabricator. He is a "wunder kindt" I love him!!! The other day, he said that he could probably use that old elevator down in the field and create feeders for my sheep. Well, I agreed it would be a fine thing to do. Little did I know that it would happen so soon. It probably took him a half hour when he got the elevator up here. Getting it out of the field probably took longer, but I didn't even know he was doing it. He said he planned to to it yesterday....that was in the late morning after church and breakfast. Well.....he did many other things, and I just figured he would not get that task done. Lo and behold, after all the other things were finished, he started on the feeder. Before you could believe it, it was done. He got rid of the junk and put the new feeders into the pastures with the bobcat.

They look like they will be fantastic. The only question was......how will the sheep use them? That had to wait until morning to be decided

In the picture of the feeder in the boys' pasture is the High Ridge version of "Dancing with the Stars" After I took the picture and then came back and put the hay in the feeder, I realized that the lovely example of togetherness that Tommy and Linus were demonstrating was really "Hey, we're hooked together!" Because of the teacup horns that Tommy has, they were really HOOKED together. Luckily, they are wonderful boys and let me pull and tug on them until they were separate. During that exercise, I was wondering what I was going to do if I was unsuccessful. I sure breathed a sigh of relief when they because un-siamese twins. I will have to keep an eye on them especially during this time of the year. I think there may be some issues between dad and son right now.
Posted by Sharrie at 9:03 AM