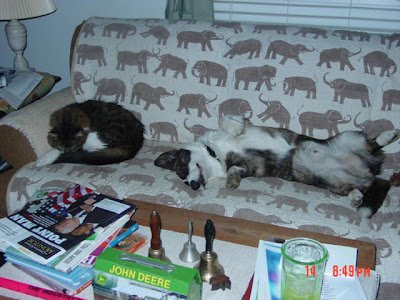 This is a picture of the excitement that exists on a Saturday night on the ridge.   A few seconds earlier the cat and dog were touching as they slept.      BUT..............would  you believe that is the same dog that locked his family out of the car with the keys in the ignition at the gas station this morning?    Well, it happened.     Love those automatic locks.     He just stepped on the lock button as I was finishing the gas fill, and Jake was getting some soda in the store.     LUCKILY........Jake had his wallet on him with the OnStar card in it.     One call to them and the fact that there was a dog in the car produced an  unlocked car as soon as they were sure who I was.    Thank heaven for OnStar, and I will never leave the keys in the car when the dog is alone in the car.    That could have happened any time that I was filling the car and had the dog along with me.    Then I might not have my cell phone, and I certainly would not have my purse since I  use a credit card to get gas.          Oh well...............learned a new lesson today thanks to Mr. Zippy.

As a reward we took him to his favorite store, TSC  (Tractor Supply Company) so that he could comb the dog food aisle for treats besides getting treats from his favorite store employee.    He really loves that store.
Posted by Sharrie at 8:50 PM

Zippy is too young to drive!

Thank God at least someone else has dogs that know the same trick! Moose locked himself and Clairee the rough in the truck one night before class. 45 mins later we figured out that my husband's truck key opened one door in my tahoe. Moose is now working on his "touch" command so he can unlock the doors next time, instead of relocking them 5 times by standing on the electric key lock. Thanks for the giggle.