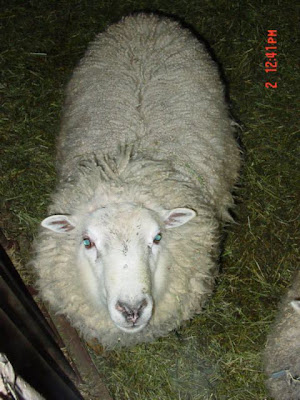 This is the reason for the title. Fluffer is my white ram without horns. He doesn't even have scurs since he was put in with my wether and my ram lamb. He looks better without those misshapen scurs. This morning, when I went out to feed him, I realized how much he reminded me of a Lincoln. I just love the Lincoln breed when they have those beautiful crimpy locks hanging down around their heads. He doesn't make it in length, but he sure does in the crimp category. He has a part down his back and just beautiful crimpy white wool. He is my little "Lincoln". Now I wish he would work on giving me a little ewe lamb to carry on his mother's genes and disposition.

I do have breeding groups finally --- for a week now. Pogo has been renamed Butthead. He is totally destroying the small ewe shed. You would think he would be happy to have three black beauties for his own, but "OH, NO!". He has to be a butthead. He has been somewhat better the last three days, so maybe I can leave him in with them. They do not seem to get along well at all. The two other groups are much more settled, especially after the first day.

I am finally spinning again. It has been a long time, and it feels good. Yesterday I plied some yard to use for a hat for my daughter-in-law. I am not an accomplished knitter, but I will give it the "old college try". She said it could stay the white that she saw me spinning on Thanksgiving. It is a beautiful cream color, and I really love how it looks. It is in a sink full of water now being "finished". I need to gather up some other stuff....aka.. needles, stitch holder, etc. When the wool drys, I will be ready to get started. Time will tell.
Posted by Sharrie at 12:39 PM

Fluffer is so handsome! Lucky ewes on your farm!! I am just learning how to knit - it's not a walk in the park! I can't wait to wash some of my own fleeces this spring and give spinning a try. It's all new to me!