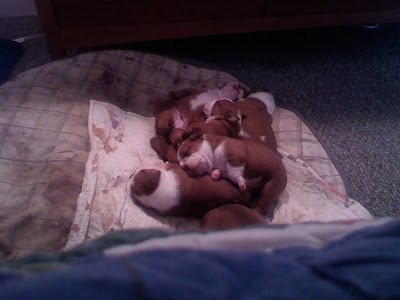 This is the best picture so far of the litter of little bullies in Florida. I like the one with the belly showing. Even though you can only see five of them, the pile was precious.

(No pictures of this today.) Since Libby has been kind of naughty, I knew that she needed exercise. Soooooooo I decided that after church, I would take both dogs out for a walk in the snow. I figured I could break through the ice crust with my weight, and they could find a place to run. Not true!!! In some places it was fine. In some places I had to crawl to stay on top of the crust because the drift was so deep. In some places the snow had been blown off of the ice, and I didn't wear my ice boots. There was no "just right". Even Scooter did not appreciate the real icy places. Libby was just off on her own. Scooter stayed right by me. They both were nearly on top of my when I was crawling. Everyone can use a little good help, and two good helpers were more than enough.

I won't be going out to try and walk again. I will stick to knitting, spinning and running the quilting machine. I might even clean the house. Much safer!

BTW........Yesterday, Butthead got removed from his three black girls. It was necessary to insure that what was left of the shed and fence could still be used as a shelter and a fence. Ami and her two daughters are either PG or not. They only had two weeks exposure to the ram. I guess I will have to look to the other two rams to do their duty.
Posted by Sharrie at 11:36 AM

You're KILLING me with that puppy picture!!!

The walking outside here is nearly impossible here, too. Not so much snow, but the ice underneath is so dangerous. And I removed my own "butthead" today from his breeding group, he destroyed much of the shelter the ewes had, and bent hog panels mounted to steel fence posts to the point of ruin. Good riddance!

Yes, I think you should keep busy "inside" your house....sounds too treacherous outside...(even with two helpers!):)