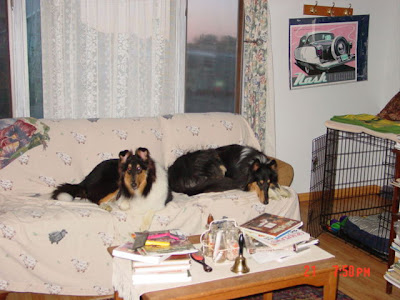 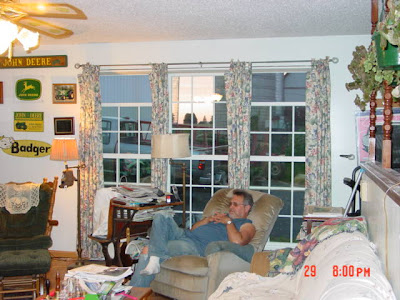 My mom always used to say that miracles will never cease. She was right. I have a new window in my living room. Not that there was anything wrong with the other one. Besides: The side windows were casement. I hate them. All of them were cloudy because they were defective. There were holes on some from guns? Go figure! AND Libby finally broke the big middle one in a fit of wild "run and chase" in the house where she ended up on the couch(in front of the window) with too much speed left to stop. She didn't get hurt, but she broked the window which was cracked anyway.

Thank you, Libby! We were going to replace that window eventually, but now is even better for me. It took all afternoon on Saturday, but that is not too bad. During that time we had a hail storm with a tarp over the opening and a good thunderstorm to go with it. I don't think the window would right in an old log home, but I sure do love the light. It even lights up the dining room. My drapes look wonderful on it, and it just needs trim to be finished.

Now we just need to get in the kitchen windows and the two that we have for the upstairs. I will wait a bit on that. I think the kitchen windows are a problem because we need to replace some logs before the one over the sink can be put in. It will be a much bigger project that the one was on Saturday.

I have suggested to Libby that she wait on any other repairs for now.
Posted by Sharrie at 3:34 PM

Michelle, People say that having a dog is good for your health. It sure has helped my mental health.