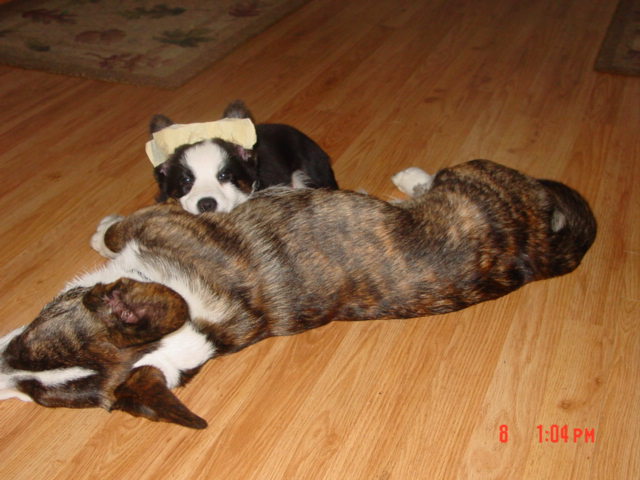 I was doing dishes just now, and when I turned around, there was Little Beaver with his head resting on his new best buddy, Zippy.    At that moment, nothing could have made me much happier.    Scooter loved to sleep with his head on Suni, our cocker spaniel when they were our two dogs.    The two Cardi boys play hard and run hard, but I guess Little Beaver doesn't mind if he is willing to sleep with his friend.

Little Beaver got his ears taped last night.   He sat and took that like a trouper.    The tape takes a beating in their play, but Zippy isn't bothering it.    I was worried about that. 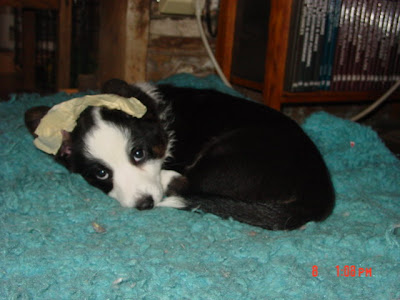 Right now everyone is taking his afternoon nap.    Zippy is on the love seat and whimpering in his sleep.
Scooter is out flat on the floor behind me.    Little Beaver is taking his second nap outside of his crate.  He was curled up on the blanket like the photo shows, but now he is is laid out on his side.    It is quiet now,..................but it won't be for long.

This little guy is photogenic; who wouldn't love a puppy that looks like that  picture.

Dozer rests his head on Jackson, too; just makes your heart melt, doesn't it? So Zippy's registered name is Red Ryder? Will Little Beaver have a call name like Zippy?

He is way too cute. Enjoy him while he's a baby. It doesn't last nearly long enough.

oh my goodness yes he is the most adorable little guy ever!

The whole litter always cuddled like that. He loved to snuggle with me too when i picked him up.

I know I could never say no to that face....so I wish you good luck with that ;)

Michelle, I was just kidding with the title because Red Ryder's young friend's name was Little Beaver. Zippy's registered name is Solstsice's the flying farmer.

Cardis love to rest their heads. Zippy's mom especially likes a pillow for her head.

Beaver (as in "the Beav"?) looks a lot like his half-siblings Rogue and Rio. I'm happy to see that.

Yes, he alternates between Little Beaver and "the Beav". Either one works.

Oh they are cute, I love it when the dogs all cuddle up. Why do you tape their ears? I missed that last time.

Their ears just need a little, or a lot of, encouragement to make them stand up like Cardi ears should. I hope this will be a quick one. Zippy's took forever!