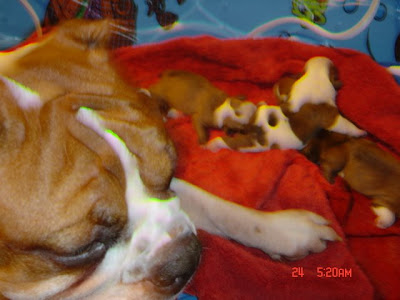 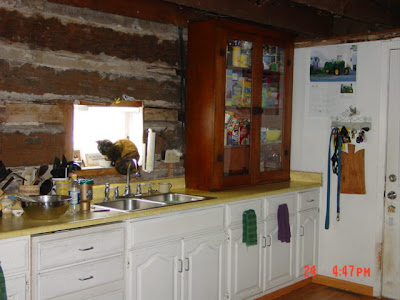 Maggie had her babies. Early Monday morning, Bruno, the dad, woke Todd up, and he heard squealing. Maggie had already delivered one baby. He decided that if she did one, she could keep going- which she did. When she was done, there were six, two boys and four girls. He had tried to get a vet, but would have had to use an emergency survice. He thought that she was going into labor. Guess he was right. His vet was very surprised that Maggie delivered the puppies on her own. I guess that is kind of rare. Last night one of the girls dogs died. Todd said earlier when I talked to him that he was worried about her. Otherwise, all seem to be doing well. Maggie is being quite a good mother. I am not surprised since I found her to be a real nice dog both times I met her.

Yesterday, Jake took the day off work. We went into Sparta and ordered two windows for the kitchen and then went to an antique/used store just to look. Well, wouldn't you know it, but they had a cabinet that would fit on the counter to cover where there used to be a door. We went back and bought it, and Jake secured it to the counter. It will be moved several times before it reaches it final spot, but it will be in approximately the same place that it is now. It will cover the new logs that will have to be positioned where the door was cut out. Now, if we can just get the two new windows installed, that will be a wonderful improvement to the kitchen.
Posted by Sharrie at 10:13 PM

Yea for Maggie! Bulldogs CAN deliver naturally sometimes; most breeders are just not willing to take the risk to let them try. If one gets stuck, you are into emergency surgery trying to save mom and the rest. In our first litter we had a "water baby" that never could have been delivered naturally, so we were obviously thankful for the scheduled c-section.